scoop.me
Home Europe Syria took in tens of thousands of European refugees during the Second... 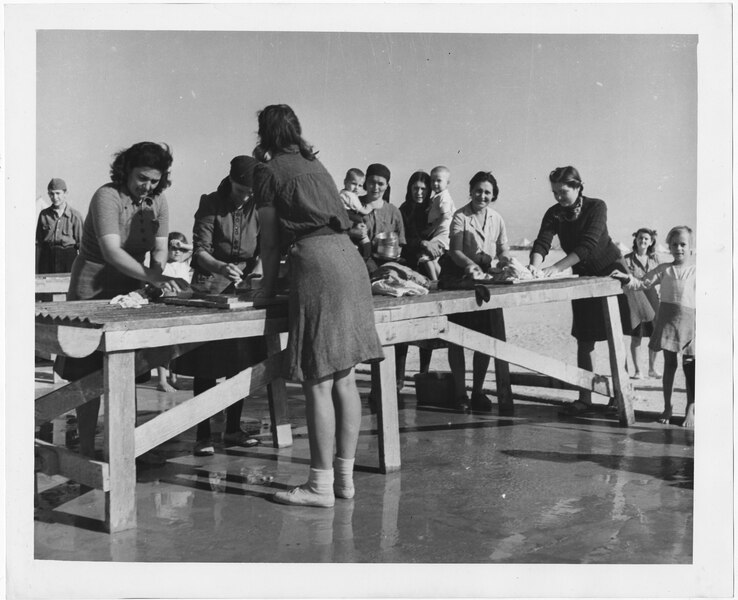 During the Second World War, hundreds of thousands of people in Europe had to leave their homes and seek safety elsewhere. One of the places these refugees found shelter was Syria. A fact that is often forgotten when we remember the war. Now the grandchildren and great-grandchildren of those who welcomed the displaced with open arms are seeking protection with us.

When the Nazis occupied large parts of Eastern Europe and the Balkans, countless civilians were displaced. In the occupied territories, Jews and other undesirable minorities – but also those suspected of supporting partisan fighters – were the subject of targeted attacks and forced evacuations. They had to flee, and tried to find shelter in the south and east. The Croats who lived along the Dalmatian coast fled to the Adriatic island of Vis. Greek inhabitants of the Dodecanese found their way to Cyprus under British protection.

Great Britain founded the Middle East Relief and Refugee Administration organisation in 1942. It organised the movement of about 40,000 Poles, Greeks and Yugoslavs, and their distribution to camps in Egypt, southern Palestine and Syria. In the 1940s, Aleppo in Syria was, as an old and flourishing metropolis. It was a true hub of emigrants, exiles – and also spies.

After registration in the refugee camps, the new arrivals underwent a thorough medical examination. They had to wash their clothes and shoes until the officials found them sufficiently disinfected. Once the refugees were healthy enough, they were taken to the real camp. There, they were divided into living quarters for families, unaccompanied children, single men and women. When assigned to a specific part of the camp, the refugees had few opportunities to go outside. They were only occasionally going on excursions under the supervision of camp officials.

In Syria, when the refugees in the Aleppo camp walked the several miles to the city, they visited shops to buy basic necessities, watched a film in the local cinema. Or they simply distracted themselves from the monotony of camp life. The camp at Moses Wells in Egypt was not within walking distance of any city, but the refugees could spend some time each day bathing in the nearby Red Sea.

Conditions were poor, but there were playgrounds, sports fields and other recreational facilities; the inhabitants could earn a living or learn a trade there. However, there were also cases in which the refugees were forced to take up menial jobs. The camp rationed food, but the refugees could buy their supplies in local shops.

In the refugee camps in the Middle East the classes were overcrowded – nevertheless the refugee children received school education. The locals made efforts to create a friendly environment. In Nuseirat, for example, a refugee artist hung many of his paintings on the walls of a kindergarten in the camp, making the classrooms “bright and cheerful”. Wealthy people in the area donated toys, games, and dolls to the kindergarten, prompting a camp official to remark that it was “cheap compared to many in the United States”.

Between 1939 and 1941, Iran took in Poles who had been forced to flee the Nazi slaughter and Soviet labour camps. They reached the Iranian shores of the Caspian Sea weak and often ill. The Iranians welcomed them with open arms, though. “The friendly Persians crowded around the buses and shouted what must have been words of welcome, pushing gifts such as dates, nuts, roasted peas with raisins and juicy pomegranates through the open windows,” recalled a Polish teacher who lived in the city of Isfahan.

In the end, after the end of the Second World War, most European refugees from the Middle East either returned to their homes or moved. Despite contemporary debates around Muslim migrants in Europe, this story is scarcely remembered.

An American newsreel from this period shows a Polish refugee camp in northern Iran, equipped by the American Red Cross. The Poles were able to keep their language and customs alive even while fleeing the war, while “working the ancient soil of Persia”.

This work is licensed under the Creative Common License. In case of new republication, please cite Kontrast/Jakob Zerbes as the Source/Author and set a link to the article in English: https://scoop.me/syria-refugees-second-world-war/ The rights to the content remain with the original publisher.
original source
REPUBLISH