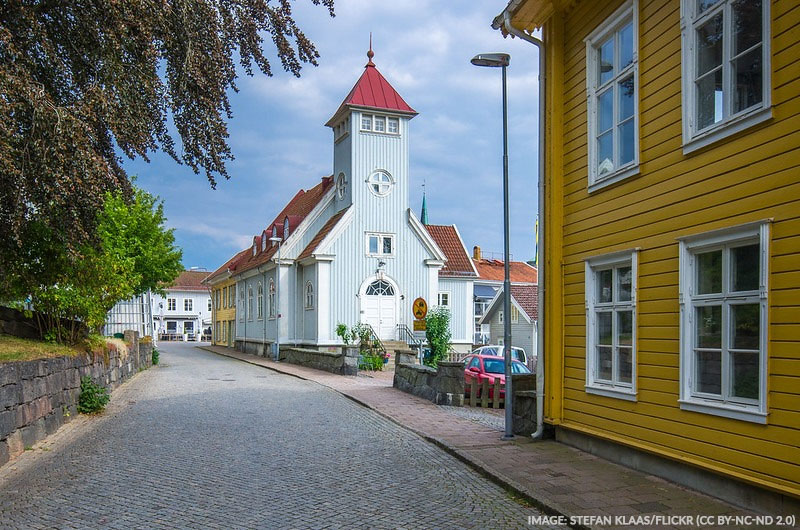 After the neo-Nazi murder of a 14-year-old, the city of Kungälv no longer wants to watch right-wing extremism spread. It seeks help and develops the “Tolerance Project”, which is aimed primarily at schoolchildren. They should be able to talk about feelings such as hatred and their fears – especially with those against whom they are directed. The result: neo-Nazis no longer find fruitful ground in schoolyards; the project known as the “Kungälv model” has become a model for the whole world.

John Hron is 14 when he is murdered in August 1995. He is camping with a friend when neo-Nazis attack them. They beat on John’s head, throw him into the river next to the tent – he drowns. Hron was an activist and spoke out against racism. Not only is his family – the whole town in shock. Although the neo-Nazi scene admittedly has been visible for years.

Kungälv is a small town in the west of Sweden. In 1995, Sweden’s great financial and banking crisis is just over a year ago. The country and its cities are in crisis. There is no money for investment, competition on the job market is increasing – and hatred on migrants is rising. Neo-Nazis are spreading, also in Kungälv.

In the city of 20,000 inhabitants, they score highly at schools – and attack people who fit the image of the bogeyman. John was one of them.

A city gets active against right-wing extremism

After John Hron’s murder, the city turns to Christer Mattsson. He is a teacher in Kungälv and lectures at the University of Gothenburg. His assessment: If right-wing extremists are up to something in a city, then the city has to do something about it. He starts the “Tolerance Project” – now known as the “Kungälv Model”. The goal: to deprive neo-Nazis of their foundation. Young people have to learn how to deal with fears and feelings of hatred, so they will no longer fall for right-wing extremist propaganda.

Teachers, social workers and social pedagogues in Kungälv work together to address young people who move in neo-Nazi circles and their environment. In addition, they identify local problem areas where neo-Nazis are particularly active in order to find out where young people could become victims of violence.

Since 2001, Mattsson and other teachers have held workshops at schools – especially for 14 to 16 year olds. Often, girls whose boyfriends are active in the neo-Nazi scene also take part. In the workshops, the young people discuss about their worldview, about feelings. Moreover, they are confronted with school colleagues who are not right wing or whose families come from other countries.

Maarten van Zalk researched the impact of the “Tolerance Project” in Kungälv. Discussing, listening, empathizing helps to reduce feelings of hatred. For right-wing extremist youths soon have no friends outside the scene, they hear no other views and do not know the feelings of others. The tolerance project actively ensures that contact with other people is not cut off:

“If you are part of a racist subculture, you are unlikely to speak to children from migrant families. The Tolerance Project encourages breaking this circle.”

“No one else would have gotten me out of there”

Madeleine was one of the first participants in the workshops. She used to mob migrants and was a skin girl who sprayed Nazi symbols in Kungälv. At school, she had to think about where her hatred came from. Today she is 31, a teacher herself. She sums up:

“I don’t know what would have happened to me if I hadn’t had this experience. Today I would probably be the girlfriend of a neo-Nazi. I just didn’t have a network to get me out of there.”

Learning about the Holocaust is part of the programme

The workshops build on each other and are held over a period of about 6 months. At the end of the project, the pupils take a trip of several days to the memorial site in Auschwitz, as we know it from “study trips” e.g. of the association “Gedenkdienst” in Germany.

In the 90s, schoolyards were the places where neo-Nazi groups searched for young people to recruit. That is over. A teacher at the Ytterby School who participates in the project knows well that the convinced right-wing extremists still exist. They still live in the area. Nevertheless, they leave the school – and the students – alone.

The “Kungälv model” costs little and brings a lot

The “Tolerance Project”, now known as the “Kungälv Model”, has become a role model. Every year, around 800 pupils in 60 schools take part in the project.

In addition, a group of economists and behavioural scientists has found that this project is much cheaper for a city than ignoring the problem of right-wing extremism. In their study “The Price of Intolerance,” they show: In a period of 15 years, “looking away” costs up to 27 million euros. The reason: right-wing extremist groups and others commit about 650 crimes every year throughout Sweden and injure many people. This means that the police, hospitals and courts get involved. And that costs money.

The “Tolerance Troject”, on the other hand, costs just 1.2 million euros for the same period. That shows: The price of hatred and violence is much higher than investing in prevention.

The greatest success for the founders, however, is that they encourage young people to talk to each other, learn and live together peacefully in their city.