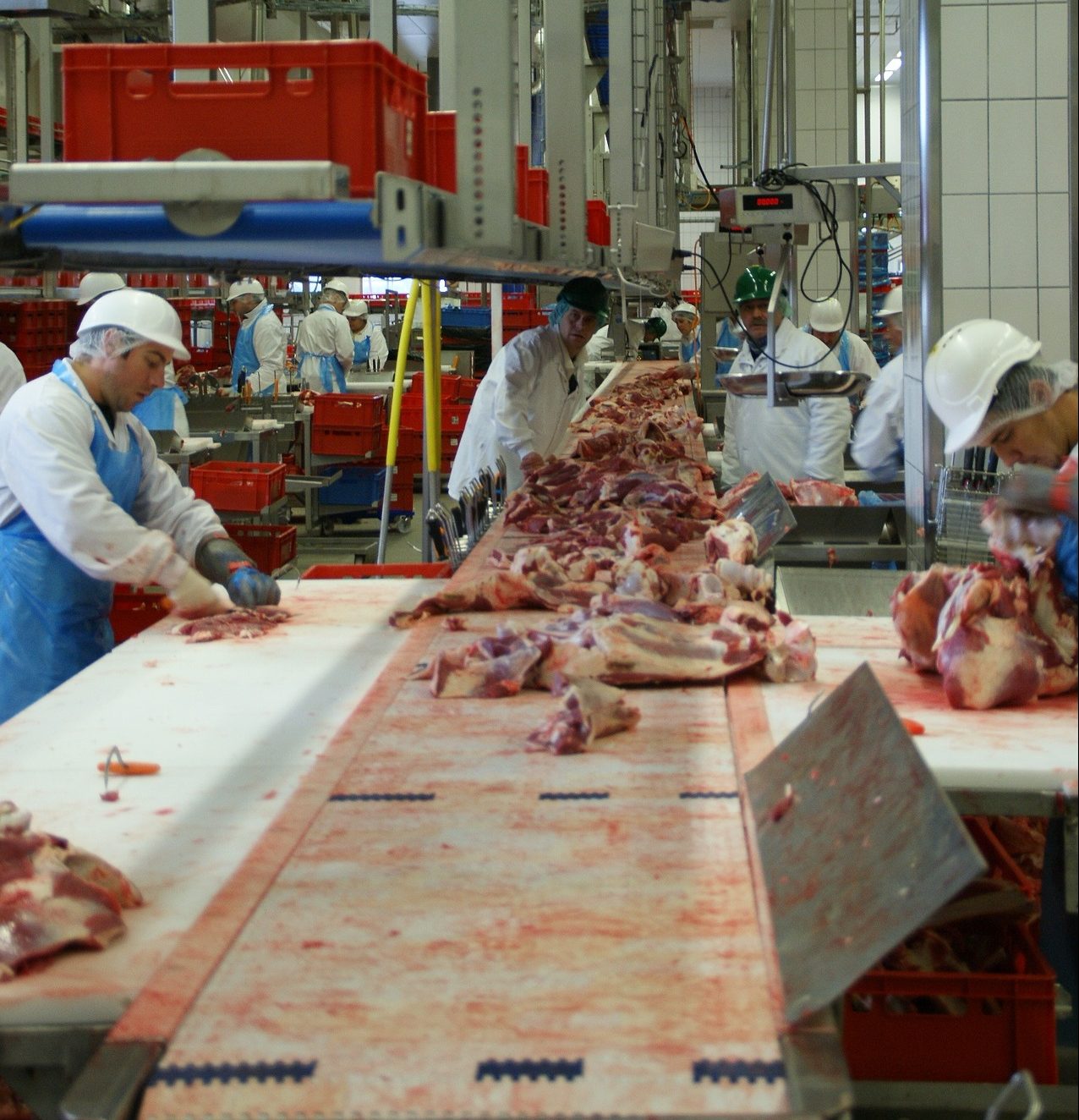 Germany’s meat industry pursued a very successful wage dumping strategy. An almost “mafia-like” system of labour procurement was based on cheap labour from Eastern Europe. Contract workers, temporary workers, migrant workers were placed for profit into the meat industry. The corporations and the “labour brokers” earned fortunes through wage dumping at the expense of the working men and women.

The wage dumping scandal blew up due to massive covid-19 outbreaks in several meat factories in the summer of 2020. Among others, in a meatpacking plant in the German state of North Rhine-Westphalia. More than 1,500 workers out of 7,000 employees tested positive causing the closure of the nearby districts Gütersloh and Warendorf; as well as lots of bad publicity for the plant’s owner, the Tönnies group. Tönnies is a giant of the German meat industry. Suddenly, the issue of working conditions was thrust into the spotlight.

Many factors make slaughterhouses particularly vulnerable to the transmission of the disease, even under the best conditions. “The workers stand shoulder to shoulder and sweat from the hard work,” says Johannes Specht, head of collective bargaining at the Food, Beverages and Catering Union (NGG), which represents meat industry workers in Germany. “They breathe deeply, it is air-conditioned and cold.”

It was not only their working conditions that were hard and unhealthy, but also their living conditions – especially during a pandemic. Many of the slaughterhouse workers lived in cramped quarters and travelled to the factory in shared vehicles or public transport. For the most part they were migrant workers, mainly from Romania, Poland and Bulgaria. They were indirectly hired by “subcontractors” to work in the slaughterhouse.

Official information regarding the contagion of workers in the meat industry is only available for some companies. Union Specht estimates about one third of the meat industry workforces – circa 30-35,000 workers – has been affected. In some companies, up to 80-90% of staff have been absent. Specht criticises the meat industry’s course of action: “Tönnies does not feel responsible for any of their working or living conditions. The company’s approach is: ‘My main workforce is not mine’. Covid-19 has now highlighted this situation.”

In recent decades, companies in the meat sector have managed to find gaps in the social partnership employment system. Workers were hired under “alternative” forms of contracts such as agency work, temporary work and secondment. As several research and investigative reports have shown, subcontracting in the meat industry has become a shady business of its own.

In their work on this topic, researchers Dorothee Bohle and Cornel Ban discovered that this system is supported by a huge and complex recruitment network. Bohle, professor of social and political change at the European University Institute, explains how “almost mafia-like subcontractors recruit people and channel them to more powerful middlemen”. These subcontractors have contracts with big German companies.

“Mafia-like” is indeed a term that comes up constantly in interviews on the subject. From German multinationals to small recruitment agencies in Romanian villages, all profit from worker placement, as Bohle shows. Solely the workers themselves do not.

Exploitation of non-regular workers by corporations

Such a system of precarious contracts makes it much easier to circumvent labor law. This became evident through the working hours. According to union sources, workers often toiled for 10, 12 or even 16 hours a day. Another issue was payment. Despite the introduction of a legal minimum wage in Germany in 2015 (currently 9.35 euros/hour), these workers often earned far below what they should have received due to unpaid overtime and unjustified wage deductions for living and travel expenses.

These migrant casual laborers were also largely excluded from workplace representation. Armin Wiese, managing director of the NGG Detmold-Paderborn and responsible for the Tönnies plant, explains: “The temporary workers could – apart from a few exceptions – not participate in the works council elections.” As a result, these employees were not considered part of their own workforce. In addition, there were language barriers, a high turnover and Eastern European workers had little experience in their home countries with trade unions.

The problematic health and safety situation was aggravated by a low number of factory inspections. Such inspections were often announced in advance, giving employers time to cover up malpractice.

“The German meat industry pursues a wage dumping strategy and has great success with it. The whole business model is based on cheap labor.” Thorsten Schulten

Cheap labor from the East

Until the 1990s, there were still sectoral collective agreements that applied to the vast majority of employees, explains Thorsten Schulten, head of the collective agreement archive at the Institute for Economic and Social Research (WSI). Then, the German meat industry began relying on workers from Eastern Europe. Initially, via bilateral quota agreements with individual countries before these became redundant due to EU enlargements.

The Posted Workers Directive (1996) gave workers and agencies the “freedom to provide services” in another EU country while remaining under the labor law and social security system of their home country. In the absence of a statutory minimum wage in Germany (until 2015), the (much lower) wage rate of the posting country could be paid.

In 2015, German companies agreed to stop using posted workers and instead turn to subcontractors based in Germany – now employing migrant workers under German law. Critics say that illegal practices by subcontractors, together with the abdication of employer responsibility by these large companies, meant that abuses continued. Schulten is convinced: “The German meat industry pursues a wage dumping strategy and is very successful with it. The whole business model is based on cheap labor.” He believes that the reintroduction of collective bargaining at the sectoral level is a crucial element for achieving true reforms.

Competition across Europe: Whoever lowers wages the most, wins

This damaging process has not only developed in Germany, but all over Europe. In order to remain “competitive”, the meat industries of other European countries also started subcontracting, says Enrico Somaglia, Deputy General Secretary of the European Federation of Food, Agriculture and Tourism (EFFAT).

This process has been further intensified by the development of large retail chains with greater bargaining power. These demand lots of cheap meat. In Germany, for example, Bohle refers to the influence of discounters like Aldi and Lidl and their “bargain prices”. The pressure to maximize profits and reduce labor costs affects companies, workers and unions in the meat sector across the continent.

According to the Meat-up Ffire report – an EU-funded research project on the value chain of pork – several other meat-producing countries have higher labor costs and stronger collective bargaining coverage in the industry compared to Germany. This applies especially to countries in the north of Europe. In Denmark, a very high unionization rate and the absence of subcontracting created better protection for both locals and migrants in slaughterhouses.

This has led to multinational companies from Denmark (e.g. Danish Crown), the Netherlands (e.g. Vion) and Belgium moving many of their facilities to Germany over the years. In 2013, this culminated in a formal complaint to the European Commission by the Belgian Ministers of Economy and Employment concerning unfair competition and social dumping.

In Germany, the state has taken the first steps towards reform. In December 2020, the Bundestag passed the Occupational Health and Safety Control Act, which prohibits subcontracting in the meat industry with immediate effect. Furthermore, there has been a ban on temporary work since April 2021 and the obligation to record working hours electronically and introduce a minimum workplace inspection quota.

The trade unions still have many concerns. Enrico Somaglia remembers:

“In 2015, German companies committed to no longer using posted workers. And in the same year we had the introduction of the minimum wage in Germany. And we all thought: ‘Ok now in Germany, it’s over. There is no more exploitation.’ But then they started subcontracting.”

It remains uncertain whether the companies will again find new ways to circumvent the new law. The huge network of intermediaries that Bohle and Ban have investigated will most likely not disappear into thin air. Bohle points out, “Among these big players are always middlemen who also own some of the properties that are then rented out to migrant workers. So, they cannot disappear from there.”

And the companies themselves could start moving their facilities to other countries. In September 2020, it was reported that Tönnies is planning to invest 75 million euros in a new pork processing plant in Spain. After all, it has become evident that working conditions in the meat industry are not just a German problem, but a European one. Ultimately, European-wide solutions will be necessary; Bohle is convinced: “These practices will be reproduced in other countries unless there really is a European reorganization of these labor relations.”

The European Federation of Food, Agriculture and Tourism Trade Unions (EFFAT) has now drawn up ten demands for action at EU level:

EFFAT’s 10 demands for action at EU level
1. A comprehensive EU initiative on subcontracting focused on two main objectives: regulating
the use of subcontracting in the meat sector, leading to direct employment; and instituting a
system of full chain liability covering both cross-border and domestic situations. The initiative should also aim at tackling collective bargaining dumping. In addition to regulating
subcontracting, actions are needed to combat bogus self-employment and regulating the use of temporary agency work in the sector.
2. A legally binding EU instrument ensuring decent housing for all mobile workers moving within the EU under the framework of the free movement of workers.
3. The urgent introduction of a European Social Security Number (ESSN) and the prompt revision of Regulation 883/2004 on social security coordination.
4. The accelerated empowerment of the European Labour Authority (ELA), in particular with
respect to joint and concerted inspections and the fight against undeclared work.
5. A clear focus in the upcoming EU initiative on fair minimum wages on strengthening sectoral collective bargaining and guaranteeing respect for workers’ and trade union rights, including
site access and the right to organise and bargain collectively.
6. EU-OSHA and other competent authorities such as the European Centre for Disease
Prevention and Control (ECDC) to assess which other factors, apart from deplorable housing
and working conditions, may have contributed to the spread of Covid-19 at meat companypremises.
7. The announced EU initiative on due diligence to cover both subcontracting and supply chains in its scope.