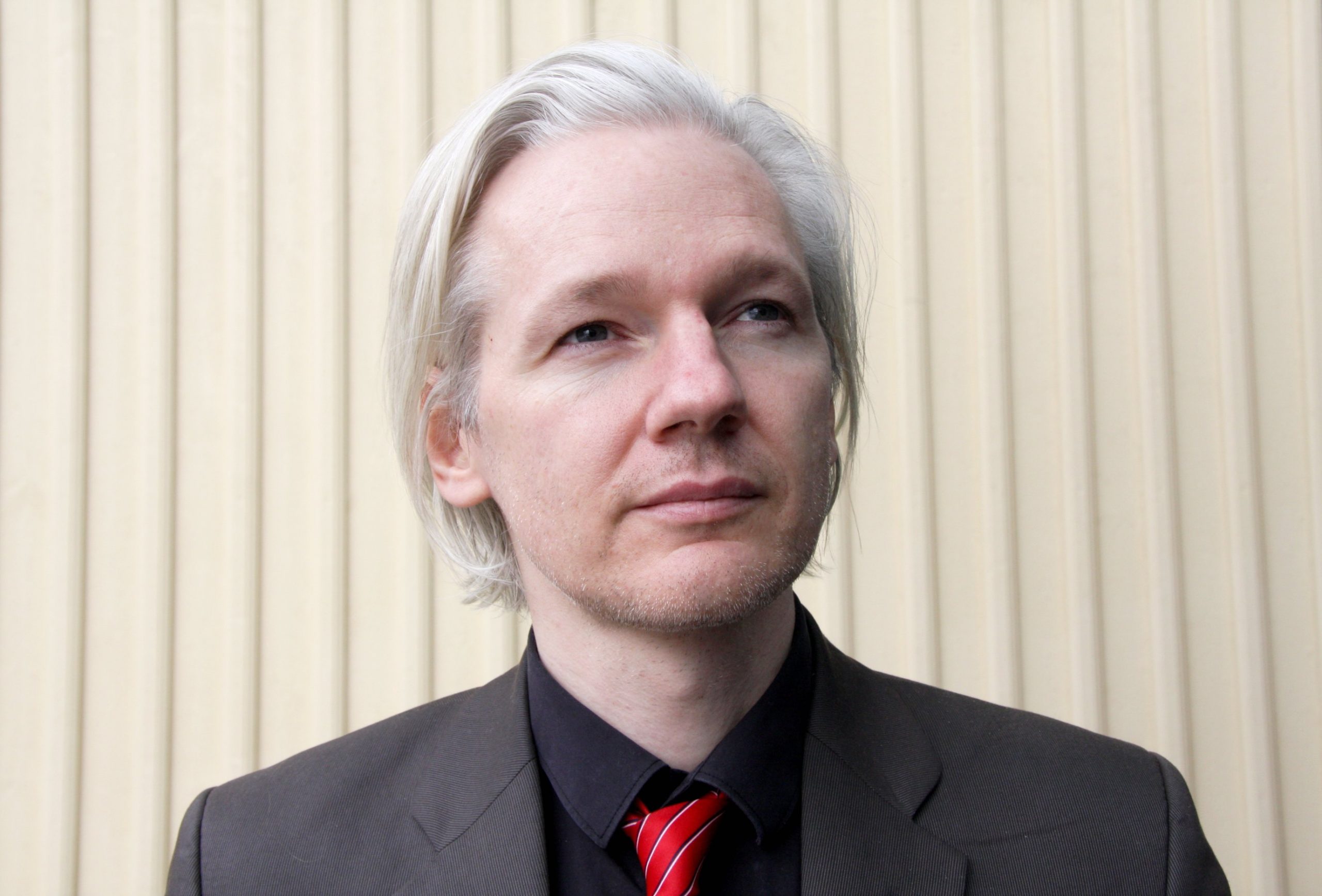 Julian Assange is the founder of WikiLeaks and has apparently served almost ten years of innocent arrest. In 2010, Assange was accused of raping two women in Sweden and was subsequently prosecuted by various states. Now it has been revealed that the Swedish police manipulated the accusations with support of the USA, who do not want Assange to uncover further war crimes. We have taken a closer look at the Assange scandal.

In 2010, the online platform WikiLeaks published thousands of documents about the war in Afghanistan and Iraq. They showed countless war crimes committed by the USA and US soldiers – with the knowledge or even on behalf of their government. The source was soldier Chelsea Manning, who downloaded the material from military computers and fed it to WikiLeaks.

Among the material was the video “Collateral Murder“. It showed a US Army operation in Iraq where US soldiers were killing several people and mocking their victims. Later it turned out that several civilians died in the attack, including two Reuters journalists. No criminal proceedings were opened against any of the soldiers. But the chase after the publisher of the video had started.

Only a short time later Julian Assange was accused of raping two women in Sweden. He vehemently denied the accusations. When an international arrest warrant was issued, he fled to the Ecuadorian embassy in London. Since then he has been in brutal solitary confinement.

Now it turns out that Julian Assange is probably innocent, with the accusations forming part of a conspiracy to silence him. These findings is the result of investigation by the UN special envoy Nils Melzer, who has taken up the case. The US wanted to make an example of Assange in order to prevent further disclosures.

We have summarised the main points of this international legal scandal.

Who is WikiLeaks founder Julian Assange?

Julian Assange is an Australian programmer and journalist. He is the founder of the platform WikiLeaks, which allows the anonymous publication of secret documents that are of fundamental public interest. Assange began using WikiLeaks to publish documents about scandals and crimes committed by international corporations, religious sects or governments. The goal is to inform people about hidden crimes and crucially to hold these institutions accountable through radical transparency.

Where does the conflict between Julian Assange and the US come from?

In 2010, WikiLeaks published countless documents about the crimes of the US Army in Iraq and Afghanistan. The Leaks included internal documents on war crimes such as torture, killing of civilians, mistreatment of prisoners of war and child prostitution committed by US soldiers – all of which happened with the knowledge, or even on behalf, of the US government.

The publications soon became an international scandal that challenged the credibility of the US government and its war in Afghanistan and Iraq.

What about the rape allegations?

Shortly after the publication of the documents on the war in Afghanistan, Julian Assange was suspected of double rape. During a stay in Sweden, Assange allegedly raped two women. The Swedish public prosecutor’s office began investigating the WikiLeaks founder.

Assange vehemently denied the accusations and contacted the Swedish authorities several times to comment on the allegations. However, the authorities were not interested in Assange’s statement. A warrant for his arrest had not yet been issued at that time and so he asked the Swedish prosecution for permission to fly to Berlin to a conference. The public prosecutor’s office gave permission. On the day of the trip, however, the Swedish justice system issued an arrest warrant. Instead of returning to Sweden, Julian Assange traveled to London where he was placed under house arrest by the British police.

How did the US interfere?

During his stay in London, the WikiLeaks founder figured out that a secret criminal case had been opened against him in the USA. Assange then offered to return to Sweden but demanded diplomatic assurances that Sweden will not extradite him to the USA. Sweden refused this assurance.

Fearing extradition to the USA, Julian Assange fled to the Ecuadorian embassy in London where he received asylum for over six years. However, when there was a change of government in Ecuador, Assange was deprived of his asylum. The British authorities arrested him on April 11th, 2019. In an unusual fast-track trial, Assange was sentenced to 50 weeks in solitary confinement for violating his house arrest conditions when he fled to the Ecuadorian embassy. Since then, the health of the WikiLeaks founder has worsened.

At the request of Assange’s lawyers, UN Special Representative for Torture Nils Melzer took up the case. Melzer had access to the investigation documents of the case through his role as UN Special Representative. And he had another advantage: Melzer speaks fluent Swedish. Shortly after the start of his investigations he came across a huge number of inconsistencies in this case. For example, the penalties against Assange were unusually high and the judicial procedure was suspicious. Melzer could hardly persuade the authorities to cooperate. However, Melzer found the biggest grievance in the rape accusations of the two Swedish women. They were manipulated.

How did the rape allegations arise?

In his research, Melzer found out that the Swedish justice system had manipulated the rape accusation. One of the two alleged rape victims had repeatedly emphasised to the authorities that she had had completely consensual sex with Assange. However, the police tried to turn her statement in another direction. The questioned woman immediately left the police station.

Actually, the woman originally went to the authorities to find out if it would be possible to oblige Assange to have an AIDS test. She was advised to do so by another woman, whose role is not quite clear. She suggested to the first woman to go to a specific police station on the other side of town where a friend of hers was on duty. It was this friendly police officer who directed the statements towards rape. The mentioned second woman – friend of the police officer – later testified herself to have been raped by Assange.

UN investigator Melzer has proof. An e-mail from the supervisor of the police officer in charge asked her to manipulate the questioning protocol.

Why was there such a strong intervention against Julian Assange?

For UN Special Representative Melzer it is clear that the prosecution of Julian Assange for rape was never about finding the truth in the alleged sexual crime. “Assange has contacted Swedish authorities several times to comment on the allegations”, Melzer reports. “But they were never interested in Assange’s testimony.”

It was always only about one thing: to muzzle the WikiLeaks founder. The pressure came mainly from the USA, which wanted to make an example of Assange. Everyone should know that the US will use all means against journalists who distribute secret documents.

The Swedish authorities have never been interested in finding out the truth either.

This is a new low for Melzer. Several democratic governments are taking part in the hunt against a journalist. This seems especially surprising in a country like Sweden, considered to be a European model state. Melzer points out, however, that Sweden has been working closely with US secret services for years and has already extradited people to the USA several times without conviction.

For UN Special Envoy Melzer, the accusations of rape have far-reaching consequences:

“The case is a huge scandal and the declaration of failure of the western rule of law. If Julian Assange gets convicted, it is a death sentence for the freedom of the press.”

What will happen to Julian Assange now?

Several politicians have already spoken out in favour of the immediate release of Assange and against his extradition to the USA, with Former German Foreign Minister Sigmar Gabriel or Nobel-Prize winner Elfriede Jelinek among Assange’s supporters. Most recently, the Council of Europe also adopted a resolution calling for his immediate release and an end to torture. If the WikiLeaks founder is indeed extradited to the USA, he will be brought before the “Espionage Court”. The trial is secret, no one has ever been acquitted. Julian Assange is facing 175 years in prison.

In case of new replublication, please cite Kontrast.at/Thomas Hackl as the Source/Author. The rights to the content remain with the original publisher.