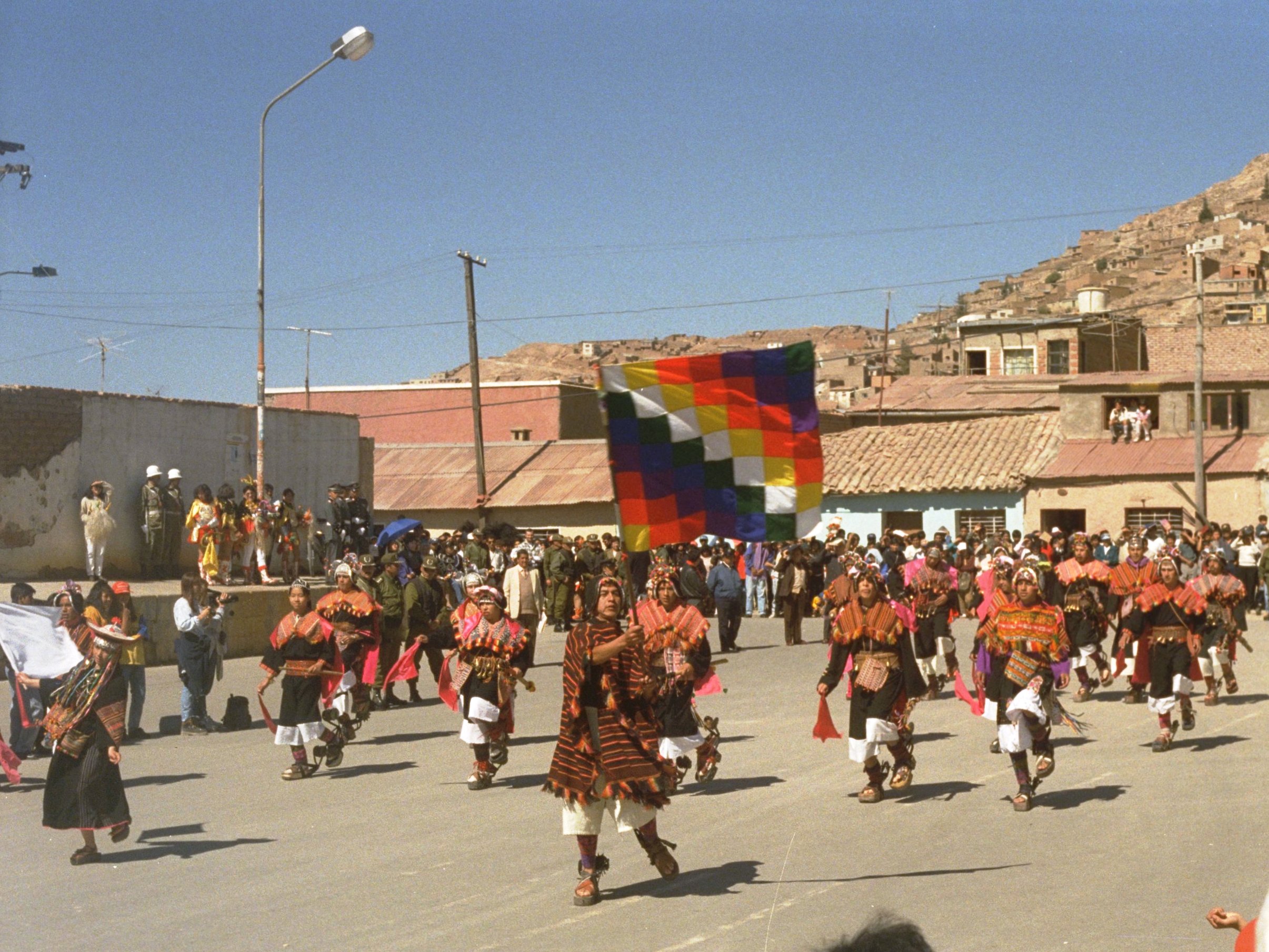 Bolivia elections 2020: MAS, the left-wing party of Evo Morales and Luis Acre claimes a landslide win. With this election victory, the Bolivian population has taught the ruling right-wing elite several lessons. It is a clear rejection of the opression and violence against the Indigenous population, social injustice and the economic sell out of Bolivia. The newly elected left-wing government will have to face a lot of challanges. Their agenda: Bonus payments for the poor and the taxation of the rich.

It was a moment of hope – not only for Bolivia, but for Latin America: Although the putschists had announced a year ago that “the savages should never again come to power,” in November 2020, after the presidential elections, the newly elected left-wing president Luis Arce and his deputy David Choquehuanca were sworn into office and Evo Morales returned to the country.

Bolivia is once again ruled by a democratically elected president, whose presidential sash again bears the “Wiphala flag”. It is the symbol of Bolivia’s indigenous population. Under the right-wing conservative coup government, the symbols of the indigenous people had been removed from state institutions. Indigenous people make up about 62 % of the entire Bolivian population.

In his inaugural speech, Luis Arce appealed to the population to overcome “division, hatred, racism and discrimination”. He believes in a better Bolivia, “by going side by side with the participation and collaboration of all Bolivians towards a peaceful coexistence”. This should consist of “principles of self-determination of the peoples, non-interference, non-alignment and full legal and political equality.”

57-year-old economist Arce won the presidential elections as the candidate of the Movement for Socialism (MAS) with 55.2% of the votes. The margin to his opponents, the liberal-conservative Carlos Mesa (31.5%) and the ultra-right Luis Fernando Camacho (14%) was huge. According to the OEP, MAS won 73 of the 130 seats in the House of Commons (“Cámara de Diputados”). It will represent 21 of the 36 senators in the House of Lords (“Cámara de Senadores”). Moreover, there is another positive aspect: 50% of the new deputies are women.

Bolivia: A clear rejection of the right-wing elite

With this brilliant presidential election victory, the Bolivian population has taught its political elite several lessons. On one hand, it is a clear rejection of the right-wing and religious interim government of President Jeanine Áñez, which seized power in November 2019 after unjustified accusations of electoral fraud and the coup against Evo Morales. The results of the elections in the Andean country revealed the farce of the so-called electoral fraud that was staged by the leadership of the OAS (Organization of American States), the Lima Group and the United States after the 2019 elections to legitimize the military coup.

The de facto government used opression and bloodshed on the indigenous people. This caused a significant economic and social setback. Coinciding with the COVID 19 pandemic, it pushed the country into a deep crisis. The International Monetary Fund (IMF) estimates that the Bolivian economy will shrink by 7.9 % in 2020.

The aftermath of the right-wing government

However, the transitional government, which only had the task to prepare for new elections, made a series of political decisions that went far beyond its mandate. It pursued a conservative agenda. For instance, it closed embassies in Nicaragua and Iran. In addition, the government signed structural contracts between the Bolivian national oil company and the Brazilian oil company Petrobras. This will affect the Bolivian economy for the next six years. Furthermore, the former government requested a loan from the IMF without parliamentary approval.

On the other hand, there is no doubt that the physical and symbolic violence against the indigenous population, which was shown in the massacres of Sacaba and Senkata and the burning of Wiphalas, contributed significantly to the indigenous majority vote for Arce. They did not want the old, colonial elites to return. The openly racist white bourgeoisie in the Departamentos Santa Cruz or Beni, which had celebrated the resignation of Evo Morales, had to understand that whoever wants to govern in Bolivia has to represent or at least include the indigenous population.

Presidential elections and the power of the people

In the end, the mobilization of the population was crucial. Under the pretext of the Covid 19 pandemic, the Añez government had the new presidential elections postponed three times until the organized population demonstratively said, “Enough is enough!”. Thousands of unionists and activists from farmer’s and grassroots organizations went on strike. They blocked pathways throughout the country to ensure that the presedential election date in October was legally set.

The Bolivian people have proven that reason, dignity and a fighting spirit cannot be suppressed either by a military coup or by government repression. The election result has important not only for Bolivia, where it is an important step towards the restoration of democracy, but for the entire Latin American region in terms of democracy, national independence, economic and social progress and the fight against racism.

The urban middle class and indigenous people associate the new president with an economic revival, modest prosperity, the taming of inflation and a noticeable reduction of poverty. With the 57-year-old economist Luis Arce – under his term as minister of economics – Bolivia experienced one of the longest periods of growth in Latin America. Bolivians consider him as a competent politician, able to restore economic stability of the country, that the Corona crisis affected  severely. Under his leadership as Minister of Economy during Evo Morales’ office, Bolivia pursued a policy of nationalizing its oil and gas deposits. With the raw materials boom, the country was able to pursue a generous redistribution policy. This reduced the severe poverty. Per capita income tripled, the currency remained stable, and extreme poverty fell from 38 to 16 %.

Restoring Bolivia: Bonus payments for the poor, taxation of the rich

Arce and his deputy Choquehuanca now face a lot of challenges. First they will have to clear up the economic and sociopolitical shambles of the putschist regime. The crisis has set back the economy, which is based on the export of raw materials, by years. It also destroyed jobs and increased poverty. The health care system has been largely destroyed, partly due to the politically motivated expulsion of Cuban doctors, and the education system is in ruins.

,Arce stated in a BBC interview.

The MAS government will have to set priorities. It will have to reverse the actions that have been carried out at the expense of the people. For instance, the former government cut back social programs and started to sell off raw materials like lithium to multinational corporations. No fewer than 256 proposals are part of the program to improve the situation in Bolivia. Among these are bonus payments for the urgent reduction of hunger and poverty and a tax on large fortunes. In addition, the program proposes the industrialization of the huge lithium deposits in the Uyuni salt lake. It also proposes the rehabilitation of the ruined health and education systems. Issues such as good education and work, environmental protection and an end to violence against women and girls are also becoming more important.

The reorganization of the police and military, which largely supported the coup last year, will be equally important. Even though the landslide in the elections may have weakened the right-wing conservative political elites, it is clear that they will not accept that the Bolivian people take their future into their own hands. It would be naïve to believe that they will now accept the result democratically without further action.

In terms of foreign policy, Arce wants to work to strengthen the Latin American state alliances. Moreover, he wants to revive the regional integration that various progressive government startedabout 15 years ago. He also wants to resume diplomatic relations with Cuba, Venezuela and Iran, which Áñez broke off. In addition, he wants to improve the strained relations with Argentina and Mexico. Bolivia would be at the side of the progressive governments and movements with him as president, Arce said. This message shows how important the new government is not only for the Andean state, but for the entire region

The comeback of Evo Morales

“A year ago Bolivia experienced one of the worst moments in its history, now democracy has been restored,” said Evo Morales. The leader of the governing party MAS left Argentina the day after the inauguration of Acre. Thousands of supporters gave him a triumphant welcome when he walked across the border into Bolivia. Argentina’s center-left president Alberto Fernández had joined Morales on the border bridge in the Argentine city of La Quiaca. A caravan, consisting of several hundred vehicles, set off through several regions to his home department of Cochabamba. Morales stressed: “The people have won, but we must remain vigilant.”

This article was originally published on www.sozialismus.de by Otto König and Richard Detje and translated by Marc Batko