Bernie Sanders’ „Medicare for All” – a universal health insurance for every American – is the centerpiece of his vision for a more equal America. While some of Sanders’ opponents try to label this idea as “radical”, it has long been a reality in Europe, and the European experience shows: Both patients and the state benefit from a national health insurance.

Health is a human right. Article 25 of the human rights declares: “Everyone has the right to a standard of living adequate for the health and well-being of himself and of his family, including […] medical care and […] the right to security in the event of unemployment, sickness, disability, widowhood, old age or other lack of livelihood.” Very few would describe human rights as “radical ideas”. However, opponents of Bernie Sanders’ “Medicare for All” – a proposal that ultimately has no other objective in mind but to guarantee the human right to health – are treating it as radical.

Sanders, applying as democratic nominee, argues that large pharmaceutical companies put their profits above the health of the American people. Over 30 million people in the US still don´t have health insurance – even more are underinsured. According to the senator, for many Americans it is becoming more and more difficult to buy necessary drugs in case of illness without being left bankrupt afterwards. The figures provide proof: The USA has the highest per capita expenditure on pharmaceuticals. According to the OECD, Americans had to spend an average of over 1,000 dollars on drugs in 2015, while sick people in Finland or Austria paid only half as much. Both these European countries have had national health insurance for decades. 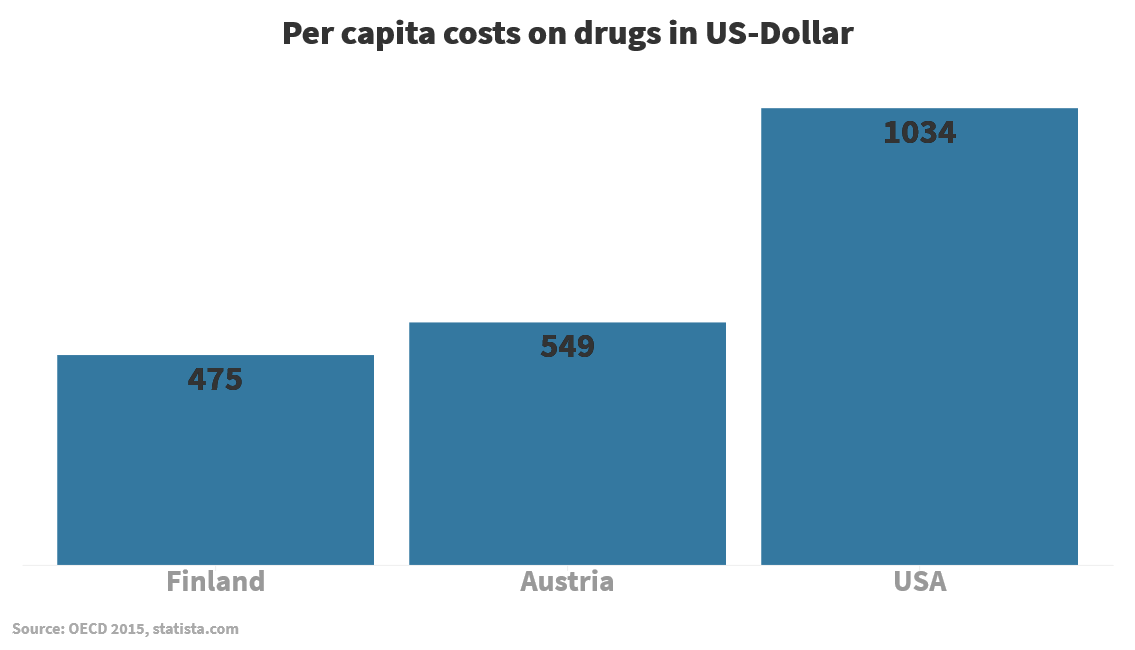 What does “Medicare for All” mean?

Senator Bernie Sanders calls his proposal for a national health insurance “Medicare for All”. From the outset the concept would leave the existing infrastructure of doctors, hospitals and other healthcare facilities in place, but nationalize the healthcare industry. Sanders’ goal is to provide a national, single-player health insurance for every American. That means: Everyone who is a US resident gets coverage, and everyone is able to obtain health services from any provider – regardless of a patient´s wealth. People who get Medicare for All would not pay more than 200 dollars a year for medicine by capping what Americans pay for prescription drugs.

To prevent private corporations from making a profit off of people’s poor health, Sander’s wants to ban private health insurance companies that offer services that are already covered by Medicare.

Medicare for All is already a reality

Public health insurance has been a reality in most European countries for decades. Particularly successful national health insurances can be found in Austria and Finland. The Scandinavian country has a compulsory and uniform insurance. Both employees and employers pay into it. The health benefits are independent of the employees’ income or profession – everyone who is resident in Finland receives the same benefits. The Finnish healthcare system is organised locally, meaning that although the state sets the guidelines, the municipalities manage the hospitals and health centres.

Bernie Sanders already expressed his support for the Finnish model in 2008:

“In Finland, a high quality national health care program exists which provides almost free health care for all – and ends up costing about half as much per capita as our system. Is there something we can learn from that model?“

The Austrian health care system follows the principle of solidarity. Austrians are compulsorily insured in a health insurance scheme, depending on their profession. Contributions to the insurance are income-dependent, meaning that people who earn more contribute more.

The idea behind the Austrian system is as follows: Everyone pays a small contribution to the insurance so that people who are affected by serious illness can finance their treatment through the insurance. This way, all Austrians know that they are well taken care of in case of illness. Whenever they feel uncomfortable, they can go visit a doctor without worrying about the costs: In Austria, consultation does not cost a penny.

Universal health care is not a radical idea. It is a reality in:

Although the insurance models in Finland and Austria offer better services, the state has to spend less overall on the health system. In 2018, the US incurred twice as much healthcare costs as the two European countries.

No one in Austria, Finland or the rest of Europe would think of universal health care for everyone as a radical idea. It is rather an elementary component of the European welfare states ensuring affordable health care for their inhabitants. And again the figures provide proof: In 2017, the average life expectancy in the US was 78.6 years. However, people in Austria and Finland live 81.7 years on average.