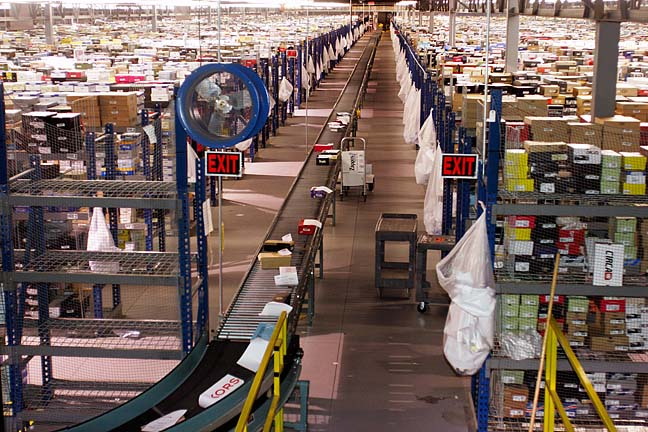 An investigation by Greenpeace, Business Insider and ZDF frontal proves that Amazon continues to throw away and destroy returns and new goods. Secretly recorded images and conversations with employees reveal the ecological madness of a throwaway culture at Amazon. The company does not see itself as responsible, but rather the so-called third-party sellers. One thing is certain, however: Amazon earns money from the destruction through a fee-based disposal service.

A research team from ZDF frontal and Business Insider spent months meeting Amazon employees and talking to them about the company’s throwaway practices. In addition, the employees secretly took photos in Amazon’s logistics centers. Keyboards, solar lights and baby blankets: the photos show masses of new goods and intact returns that are to be destroyed.

“We just stand in front of it and shake our heads. Why is this being thrown away?” said one of the employees interviewed. The goods are almost all new, and some are even in their original packaging.

Back in 2019, ZDF reported head-on on the corporation’s throwaway practices. At the time, Greenpeace found out that one to two containers full of new goods were being taken from an Amazon logistics center in Winsen an der Luhe, Lower Saxony, to a waste incineration plant in Hamburg every week.

The German government subsequently passed a law (Obhutspflicht) to make it more difficult to destroy new goods. Nevertheless, the practices do not seem to have changed, as the new revelations show.

The French TV station, M6, uncovered something similar. A journalist from the station infiltrated an Amazon logistics center near Orléans as an employee and witnessed the group’s throwaway practices.

The practices seem to be the same everywhere. In 2020 the British broadcaster ITV leaked video footage showing new laptops, TVs, and power drills being thrown away. In just one logistics center near Dunfermline, around 124,000 products are said to have been marked as “to be destroyed”. And this within only one week. By comparison, just 24,000 were marked as “donations.”

“We know from current research that the destruction of new goods is still common in 2022 – whether directly in Europe or via detours in the Global South,” says Lisa Panhuber, consumer expert at Greenpeace.

Amazon earns money from the destruction of new goods

At first glance, it seems incomprehensible why Amazon does not simply donate the new goods and returns or send them back to the producers. On closer inspection, however, it is quite simple—Amazon earns money from the disposal of products through a service fee. On top of that, if products are not sold fast enough, Amazon increases its storage costs. Thus, third-party sellers are virtually forced to have the goods destroyed instead of continuing to store them.

“Amazon is relying solely on fast sales and therefore considers the space on the shelf more valuable than the product inside,” says Viola Wohlgemuth, a resource conservation expert at Greenpeace.

In response to a question from ZDF and Greenpeace about whether masses of returned and new goods continue to be destroyed, the company says that only one percent of Amazon’s own goods are destroyed—including recycling. The problem is that almost half of all products sold on Amazon come from so-called third-party sellers. Whether these products are destroyed or recycled, however, is the responsibility of the individual providers, according to Amazon.

Instead of taking advantage of its dominant position in the market to enforce sustainable handling of new goods or returned products, the company hides behind excuses. And so Amazon continues to profit from the ecological madness of a throwaway culture.